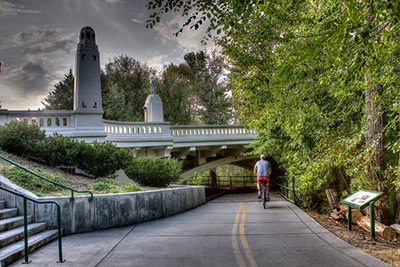 Greenbelts are increasing in popularity as urban areas grow and suburbs expand to become cities in their own right. In large metropolitan areas, where a handful of cities border each other and seem to sprawl together, it’s nice when greenbelts connect. For instance, the Garden City Greenbelt seamlessly picks up where the Boise greenbelt would otherwise leave off. It provides continuity and extends the nature walk along the Garden City walking path, offering an enchanting tour of this Idaho treasure.

What is a Greenbelt Anyway?

The idea of setting aside land near an urban area is far from a contemporary notion. According to Wikipedia, greenbelts date back as far as the Old Testament. The intention is to set aside sections of land in an urban area and leave them mostly undeveloped. The reasons for creating a greenbelt may differ from city to city, but in general, they tend to be similar. Some common motives include providing recreational opportunities, retaining rural qualities of an area, protecting natural ecosystems, and improving water and air quality.

As part of a larger greenbelt system, the Garden City Greenbelt meets all of those goals and more. Building the greenbelt resulted in the restoration and improvement of the area along the Boise River, including cleaning it up and providing a place for residents to walk, hike, cycle, fish, and enjoy a number of watersports without leaving the city limits.

The Garden City walking path along the greenbelt is actually one of the newer sections of the larger Boise greenbelt, which got its start in the 1960s. Back then, the area around the Boise River wasn’t the beautiful oasis it is today. The Garden City website reports that the river was polluted and the land around it was wild and neglected. Through decades of planning and hard work, the greenbelt has gradually grown to become a valuable feature for the communities through which it runs.

In fact, the Garden City Greenbelt is a destination that attracts visitors from near and far. Completed in 2007—and with a bike path added a year later—the Garden City section of the larger greenbelt winding through the central northern part of Ada County is dotted with trees and boasts a growing artisan community nearby. Folks walking or biking along the river’s edge on the Garden City Greenbelt can take slight detours to appreciate local art, play or relax in parks close by, or quench their thirst or appetite at one of several restaurants, cideries, or craft breweries.

The arguments for how greenbelts affect housing are varied. Some see them as a way to control the market by limiting available land for building. Others argue that greenbelts actually encourage cities to grow bigger while directing the growth away from designated greenbelt areas. What can’t be argued is that when looking for Garden City homes for sale, finding a house with greenbelt access is a plus. Being close to the Garden City walking path and all the amenities it offers is attractive to buyers of all types, whether they’re married or single, have large families, or are pet parents with dogs who need walking.

If you’ve been shopping for Garden City homes for sale and would like to find out more about Garden City, Meridian, or the rest of Southwestern Idaho give Jeff Stewart at Stewart Realty a call for a personal tour of the area and some great homes that fit your style and budget.